After last being the winners of the Supercopa de Espana in 2018, and suffering a crushing defeat in the semi-finals against Atletico de Madrid in 2019, when Correa scored a winner in the 86th minute to help Atleti move to the finals with a score of 3 – 2 in their favour, FC Barcelona will be playing in the Supercopa semi-finals today to try and come closer to winning their first, major silverware of the season.

Ronald Koeman’s side has finally started to look like a consistent, clinical side which can pull off wonders like the Granada vs Barca match in La Liga and it seems like a major positive for Barcelona fans while going into this match. While currently at the 5th position in the league, Real Sociedad’s prowess isn’t to be underestimated. Although their recent run in the La Liga leaves little to worry, winning only once out of their last twelve games, they boast players like the young Alexander Isak who scored in Sociedad’s last game.

“Sociedad is a strong opponent. It will be an interesting game because we both want to play.” – Koeman, when asked about facing Sociedad.

With Barca contending for silverware in the Supercopa this season, FCB fans will be looking at how Koeman utilises the squad he has at hand, in order to get a favourable outcome. The official squad declared for this match is given below. We see the exciting addition of Clement Lenglet in the list and also the new youngster from La Masia, Ilaix Moriba. To imagine the Supercopa without proper fans seems anti-climatic, especially with Lionel Messi being in the form that he is. Supplementing his current form is the unreal stats Messi has piled in the Supercopa, being the top-scorer in the history of the competition with 14 goals. The second one is Raul, for Real Madrid, scoring half the number (7)! 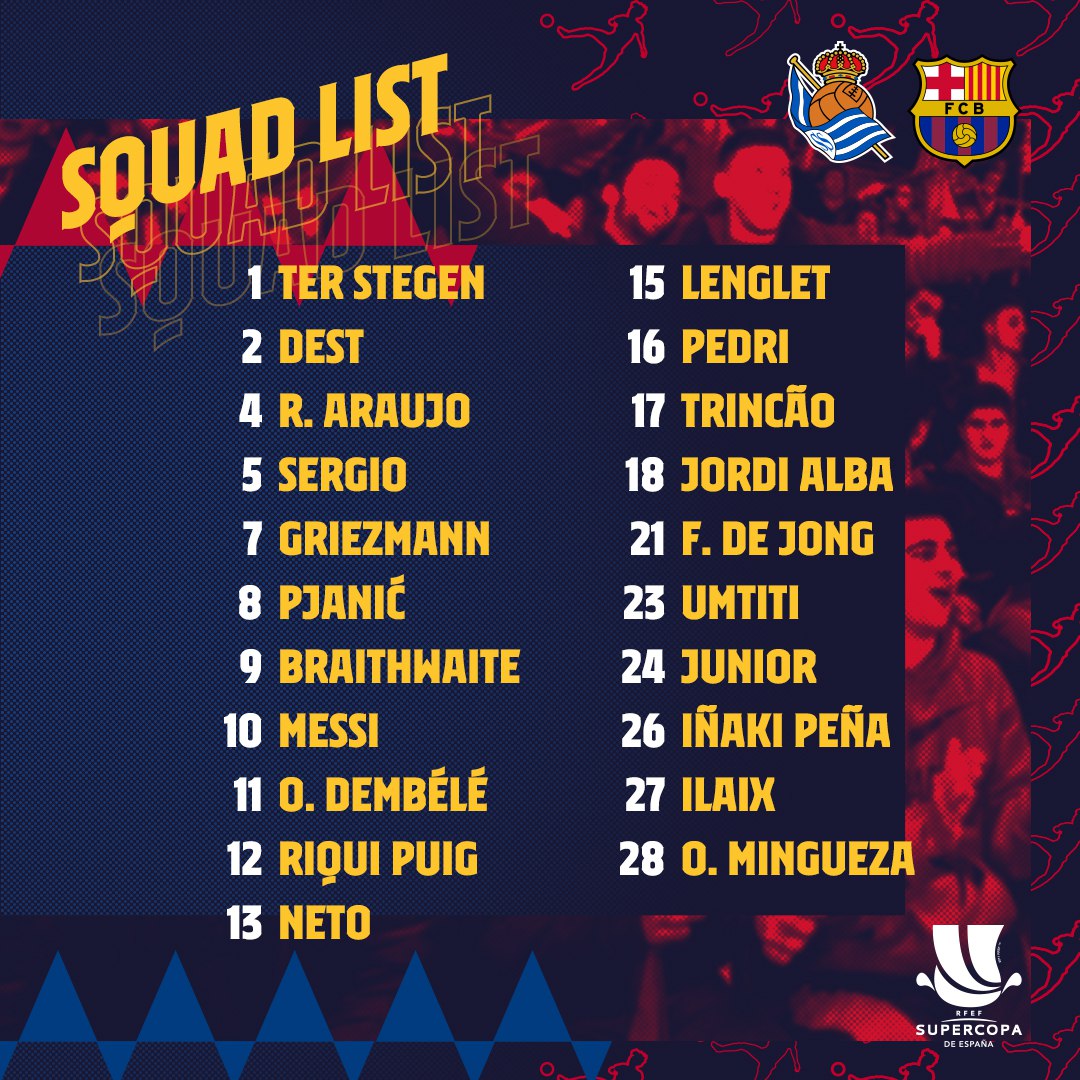 Commenting on Araujo’s injury, Koeman has assured the media that he feels confident about him playing in the match against Real Sociedad. Ronald Araujo has had individual training as well and his inclusion in the squad seems like a positive. We might get to see him play today. Messi was subbed off against Granada in the last La Liga match, possibly to rest him for this fixture. Hence, we have a high probability of watching Leo play the entire 90 minutes plus injury time. Frenkie De Jong and Dest are also, according to Koeman, ready for this match.

The Barcelona team has been gaining confidence and is performing exceptionally well, with Messi on a roll in the league and Griezmann looking confident with the ball. The midfield is alit with creativity, and Pedri has taken the forefront of this midfield, looking bright and energetic and creative.

The Messi-Pedri link-up is something to be very excited about. The Griezmann-Messi link-up is also something to look forward to, with both Messi and Griezmann scoring a brace in their last match together. The team looks confident and this confidence is expected to manifest into results in this fixture.

If Barcelona win against Sociedad and Madrid win against Athletic Club tomorrow, there is a chance to have an El Clasico in the finals of the Supercopa. While the thought seems exciting, Koeman has spoken on the prospective Clasico final, stating that he doesn’t like to talk about finals before the semis. He is hoping for a win in today’s fixture and doesn’t want to cast any guesses on the outcome of the Real-Athletic match.

(A) On the Supercopa – Calling it an important trophy for Barcelona, the gaffer has removed any doubts about the seriousness with which the first team will be competing in this fixture. In his words, the super cup might not be the MOST important trophy, but it doesn’t validate a slack in the team’s performance.

(B) On the team’s form – According to Koeman, the team has been confident and focused lately. It has improved in terms of the mentality going into matches. The team closes up on spaces when they lack possession. There has also been an overall improvement in the way the team moves on the field, in terms of the fluidity and the structure. “The team is more confident and now we find free players between the lines more often,” said Koeman.

The match is by no means an easy one, and Barcelona will have to play with focus and dedication to win against Sociedad. There is an attacking threat from Sociedad so keeping a clean sheet would be difficult and hence, the prediction can be a difficult 3-1 win for our boys!